skip to main | skip to sidebar

He Who Must Not Be Named

Couple of articles about Lord Voldemort, the villain in the Harry Potter franchise, have come out in time for the movie. I've not read the books or seen thelast movie, so I have no comments of my own, but here are two different perspectives: first from Damon Lindelof, co-creator of LOST:
http://www.thedailybeast.com/articles/2011/07/12/why-harry-potter-s-lord-voldemort-is-the-baddest-villain-ever.html
And second from Ralph Fiennes, the actor who plays the Dark Lord in the movies:
http://www.newsweek.com/2011/07/10/lord-voldemort-responds-to-critics.html
-- JF
Posted by Jason Franks at 4:53 PM No comments:

Email ThisBlogThis!Share to TwitterShare to FacebookShare to Pinterest
Labels: books, harery potter, he who must not be named, movies, voldemort 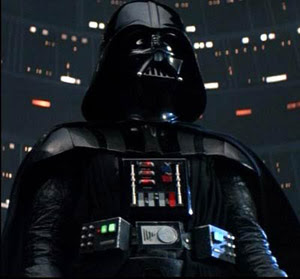 Darth Vader is possibly the only villain with a presence so big that he's been the subject of six blockbuster movies.
Lord Vader has royalty written all over him. The samurai helmet, the breath mask, the opaque black lenses, the cape, all in black: it's immediately obvious that this is a villain. His unnaturally regular breathing is the loudest thing about him. When he speaks, James Earl Jones' calm baritone gives this character an authority that is second to none on the silver screen. Vader is composed, regal, and utterly ruthless.
But his physical presence is not the only reason that Darth Vader has always been the Star Wars franchise's most popular character. The Star Wars saga is actually Darth Vader's story. I'm not just talking about the prequels, either (although I will get to them): the revelation of Darth Vader's past and the continuance of his character arc to its end is the engine upon which Star Wars is built.

Star Wars is the story of a great warrior who has succumbed to evil finding a measure of redemption.

Luke Skywalker, Vader's heir and the hero of the original trilogy, plots a similar course, but his arc is far less dramatic. In the end, Luke's story serves mainly to explain what happened to his father, and to provoke the final act of Vader's life.
Within the original films, Vader occupies a curious place. In the first Star Wars movie it's unclear what his place is within the Empire. He's obviously an important figure, but he does not have a formal place in the Empire's military. He is referred to as 'Lord Vader', but there is no evidence that the Empire has a feudal hierarchy (although some worlds, such as Alderaan, with its Princess Leia, appear to sport one). Vader's beliefs and his powers are scoffed at by the military officers, many of whom consider him a religious lunatic. When provoked into the infamous vulgar display of power in the board room, he then accepts General Tarkin's order to restrain himself, although it seems clear that he need not. Vader appears to be in charge of important tasks, such as questioning prisoners, and the generals consult with him often, but he is not a military man. He flies a fighter craft in a space battle, but he is not attached to a squadron and seems free to do as he pleases in an actual conflict. We are not shown his master, the Emperor Palpatine, until the following movie, Empire Strikes Back.
Empire Strikes Back is sure the strongest and most popular of the Star Wars movies. This, I think, is because it brings Vader into the foreground, even offering a glimpse beneath the mask. As the title indicates, in this movie Vader is given the initiative by his master and makes a show of how competent he is. His victory is assured despite the rebels' best plans. 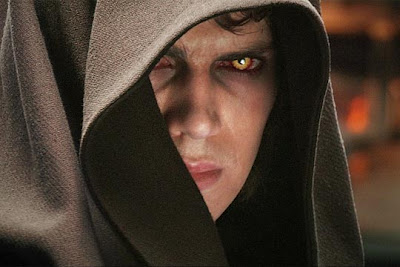 The Star Wars prequels reinforce all of this to the point of redundancy. All through the prequels we hear about how Anakin Skywaker is the chosen one, Anakin is the messiah, Anakin is the one who will save the galaxy--but the old Republic doesn't really seem to need saving. In fact, it seems to be in pretty good shape; Anakin's rise in fact leads directly to its destruction.
The Jedi council claims that Anakin will bring 'balance' to the force, and this he does: during the prequels there are but three Sith Lords, but there are scores of Jedi. By the end of the prequels there are two Sith lords (Darths Sidious and Vader) and two Jedi (Obi Wan and Yoda). That's balance.
The origin of the Star Wars films is commonly held to be Akira Kurosawa's movie, The Three Villains of the Hidden Fortress--a title that, I think, is quite telling. The villains are the crucial part of Kurosawa's film, just as they are in the Star Wars saga.
Hidden Fortress belongs to a genre of films known in Japan as Jidaigeki, (note the similarity between 'jidai' and 'Jedi'): period dramas set in the Edo period. While the structures of the films are different, many familiar characters can be found in Hidden Fortress: the spunky princess; a general of great repute, now fallen on hard times; bickering peasants (droids)... and of course a trio of interesting badguys. Most interesting among them is Tadokoro, a former comrade of the general's who has changed sides. Tadokoro has been horribly disfigured as a result of a duel with the general, but in the end he seeks redemption by betraying his new master. 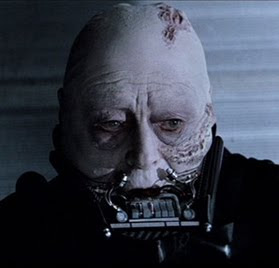 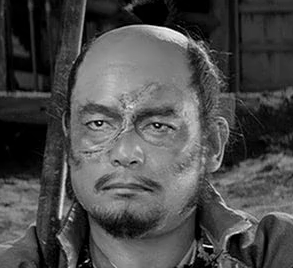 It's a great story, and no surprise that Star Wars grew around it, rather than the 'free-the-princess-stop-the-baddies' premise that it began with.
Star Wars is the story of a villain; make no mistake.
Posted by Jason Franks at 1:42 PM No comments:

Interesting post about Lex Luthor and villainy over at comicbooked.com from the ever-sagacious Emmet O'Cuana. Click over and check it out!
http://www.comicbooked.com/lex-luthor-just-another-frank-miller-dinosaur/comment-page-1/#comment-23340
-- JF
Posted by Jason Franks at 12:27 PM No comments:

After having read all but one of the Parker series, and I’m simply waiting for that motherfucker (Butcher’s Moon) to finally be re-published, the above may well be the perfect description of Stark’s iconic character. I first came across Parker, renamed Walker and perfectly portrayed by Lee Marvin, in Boorman’s awesome Point Blank (1967). This led to me The Hunter (1962), re-titled Point Blank for a time, the novel on which it was based and then any of the series that I could get my hands on. Amen to public libraries.

I’m not exaggerating when I say I’ve been in up to 25 second hand book shops across Australia and New Zealand looking for any of Stark’s masterly series. All I ever managed to find was The Hunter (in a 2nd hand bookstore in Hawthorn), retitled Payback after Brian Helgeland’s foolish remake (more on that later), and Flashfire (in a 2nd hand bookshop in New Zealand). So thank fucking Christ for University of Chicago Press who a year or two back decided it was time to re-print the series.

I’d met many people who’d heard of Parker and wanted to read Stark’s series but didn’t share my zeal (or is that obsession) with scouring second book stores. I’m now pleased to say I’ve at least a few friends who have purchased books in the series and can discuss what they make of Stark’s structure (seemingly the same, and yet the novels are always so different), Parker himself and the whole attitude of the novels. So what is Parker? Villain or anti-hero? I tend to the latter in as much he’s a cold professional who doesn’t give a shit about anything but the job, rather than a sadistic or tragic murderer. The rare times he has to be ‘civil’ or ‘friendly’ – I can’t say I ever recall Stark giving him a scene where he had to be ‘charming’ – are done through gritted teeth and simply elevate the respect I have for his disdain for all the bullshit that operates on the surface of ‘polite’ society. Some have even described Parker as the ‘non-hero’ and I’m willing to accept that as well.

So if you haven’t read any of Stark’s Parker series heed Lawrence Block’s comment: “Forget all that crap you’ve been telling yourself about War and Peace and Proust – these are the books you’ll want on that desert island.”

Now briefly to Helgeland’s film version of The Hunter. From memory it aint the travesty it could have been but it does smack of yet another remake of a great film that needn’t have happened. There are some who argue it’s more literal than Boorman’s version and hence a worthy adaptation of the novel. Even it we grant that, there are no actors of Gibson’s generation, or the current younger crop who can match Marvin’s portrayal – and at the end of the day, the books and the films are about the character more than the mechanics of the plot. The film also throws in unnecessary elements such as Gibson's voice over and deviations from the novel that seem mere excuses to throw in gratuitous violence.

The Night Has Teeth

Dracula.
If there were just one word to sum up the concept of 'evil', it would likely be Dracula.
In the pantheon of western literature's best and brightest villains, Dracula sits high on some dark Olympus, if not at the apex, then comfortably close. Barely on screen in Bram Stoker's eponymous novel for more than a few chapters, nonetheless it is Dracula who drives the book. It is Dracula who drives the films which bear his name, who drives the action in every appearance.
He's the sort of antagonist that brings out the best in a hero, which may account some for his popularity. He's all of humanity's fears and hates and loathings rolled up into one handy package. He embodies themes as varied as cannibalism, rampant sexuality, the 'other' and the fear of death and the dead, as well as more esoteric concepts (the Faustian bargain, necromancy, plague, taboo animals, etc.).
But is that all there is to it? Just some smelly themes and subconscious symbolism?
No. Dracula is the outsider, always scratching at our door, looking for a way in. The thing at the back of the cave, or waiting in the forest. The omnipresent Night, with teeth. The themes and symbols which trail after him like a cloak are but manifestations of his ultimate identity-that of the Thing That Scares Us.
It's why we go back to him, again and again, much as his victims did. We invite him in, even knowing what he is, foul breath and all. We invite him in with books and films and plays and all variety of entertainments, pitting him against ourselves and our archetypes (Dracula Vs. Sherlock Holmes, Dracula Vs. Billy the Kid, Dracula Vs. Superman, etc.), destroying him again and again, but like the Night, he always returns. We mock him in cartoons and commercials, we make him into comic books and video-games, but the savagery never diminishes, the fear never entirely goes away.
It's the fear that we can't do without. The terror of being hunted. We can't forget it, even with all of evolution at our back, with our science and religion and civilization. Some part of us always remembers the cave, and thing that we saw there, waiting to pounce out of the darkness.
We can't get rid of him, just like we can't rid ourselves of the atavistic fears handed down by our primordial ancestors. No matter how much we try to dislodge him, to remake him or remold him, Dracula clings to us, he is in the back of our head. In our blood.
*Edited to add-if you're interested in seeing more about my thoughts on Dracula check out DRACULA MONTH on my blog*
Posted by Josh Reynolds at 9:13 PM 1 comment: